Being a total music tech geek who’s reading Gearslutz and other related forums all the time when not busy making music, mastering it for clients or  playing with plug-ins and DAWs, I thought it might be relevant to start writing about it a little. So here’s a little checkout of the Serum synth by Xfer Records. I won’t go into writing a comprehensive manual or a comparison, but just say how I felt about it. I know there’s numerous reviews out there, but I wanted to do one of my own just go get practice with writing a bit longer as I’m planning to write more for the blog.

I bought Serum recently after demoing it for a while. I don’t dare demo things very often because to be super honest, I already have everything I need to make great music (however, what does that have to do with anything if you love [are addicted to] great music stuff?], and it always happens that I come up with some greatness with the thing I demo and end up feeling, “Oh man, I need this”. And that’s exactly what happened with Serum.

I dove in without reading the manual at all, but I had watched a few videos. What caught my eye was the very clear layout, and the nice-looking wavetable view. Pretty much the “main” thing with Serum is that it uses wavetables (you do have the classic oscillators there, too, of course), and you can morph thru the wavetable position to have the wavetable “move around” (as above), which in all fairness creates very pleasing and interesting results, and the visual nature is quite fulfilling. Assigning a slowly-moving LFO to the wavetable position knob is a must for introducing that little bit of organic life to a sound instead of having it play static.
What’s also really interesting that you can import your sounds into Serum and have it convert them into a set of wavetable frames and morph between them. I tried that out with some growly bass sounds I had created and resampled earlier, and was very impressed with the result.

Guys creating big pad sounds need unison, right? You have the handy unison feature next to the oscillator parameters that you can quickly crank up for some big stuff. You have detune, which again demonstrates visually what it does: detunes the stacked sounds and takes them further apart from one another. Moderate values (not going over 12 o’clock) are best suited for musical results, and the unison width can be set under Global settings (you can go wide or totally mono if you wish).  Blend sets the relative level between the stacked sounds (seen in the pic).
Under global settings, you can also access the nice Stack feature, which layers additional voices of the unison, and we’re talking additions of at least 12 voices here (and you can create a fifth, too), so this is a lush-pad-layer’s dream (See a quick Instagram video on how to create a lush pad with Serum in 15 seconds).

To the left of the two main oscillators you have the sub oscillator, which is great; it has all the classic sine/saw/square shapes as you’d expect, and if you’re doing bass sounds, these are for providing you with a solid sub in case your main oscillators are doing some fancy noisy stuff. A handy feature is its direct out, which bypasses all the possible FX processing for the sub. You can basically create all the “noise” with OSC A & B and get crazy with FX and have the clean, pure sub go out unprocessed – that’s good design in case you want to add some reverb, for example, but we don’t want that for sub, right?

That takes us to the filter, where you can assign what comes into it with relevant switches for OSC A & B, noise and sub (you don’t have to route any of these thru the filter if you don’t want, so if you so wish, you can filter the OSC A & B but let the nice square sub go thru unfiltered to provide some tone).
There’s plenty of options; you have all the basic stuff as you’d expect, but also some pretty creative ones such as the reverb filter, which sounds really damn interesting…washy and crazy even with some lush pad sounds.
I also like the drive of the filter, which beefs up the sound and adds a bit of body…I’m a fan of drive!
There’s also a mix control for the filter which serves as wet/dry control, and you can switch it to level (just click on the word below the knob) so it acts as filter output volume (again, a nice feature if you come up with some crazy filter settings that would otherwise drive it all the way to the red). 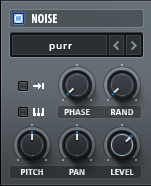 I love the noise oscillator – because I love noise and aural dirt! The noise section has great, organic, interesting sounds (AC hum, for example) unlike many other more regular synths. You’ll find great tone among them, and there’s lots of variety – probably around 100 in total. There’s also loads of kick attacks for those willing to craft their own kicks, and with those, the one-shot mode comes in handy: you don’t have the loop the noise if you don’t wish, so using short clicks with kicks is the shit (did that sort of rhyme or sound like rap?). You can also disable pitch tracking, which is another useful feature.

You can also modify the phase of the noise sound of your choice in realtime, which creates very interesting sounds: see the IG video above for AC hum noise generator getting its phase modulated and run into a the reverb filter w/ cutoff mod.
You can also use your own noise sources (i.e., your own samples, so it’s a sample player, too): I had a go with a sample of a purring cat and had some pretty interesting results to say the least.

I haven’t got super deep with the FX as I tend to like to use my own (just an old habit if anything) but I did have a go with distortion (mmm I like!), reverb and the hyper/dimension (which I believe is the dimension expander plug-in that Xfer give out for free) at least and thought they are good and will definitely be using them in the future. What’s nice is that you can reorder them (have distortion after reverb and EQ if you wish, or the other way round). There’s plenty of parameters to mess with, and all is free game in terms of getting it all modulated.

Speaking of modulation, at the bottom you have envelopes and LFOs which you can assign to pretty much anything (I’ll skip saying more about them for the sake of brevity, but they do work well and I have no complaints). What I loved from the get-go is how easy assigning them can be (compared to some slow menu-diving with some hardware gear, for example): you literally just drag and drop them wherever you want, and then you can set the range and effect that the envelope/LFO has on the destination.
The Matrix menu is a total godsend as well, offering you easy ways of altering the assigned modulations and their strength and setting them to unipolar/bipolar as well as adjusting their curves (this is great for some sweeps, for example!).

All the mangling of LFOs and envelopes (just as that of anything Serum has to offer) and assigning them to wherever is a breeze, which I love a lot as I often want to get sounds down quite quick.  Not that I don’t like to spend time on working on my sounds, but the basic functions have to be painless or otherwise they become an annoyance that make you feel, “Ah yeah, might work with it but that’s annoying to do” and at some point you end up not using it at all.
This is another thing where Serum totally hits the nail on the head: it is very easy to achieve the things you think of with very little effort, for everything is laid out so clearly in such fashion that you don’t have to search things at all as they’re always there for you. And this comes from someone who’s not a synth hotshot.
TBH, as much as I love Ableton Live’s minimal look that lets me concentrate on the sound, for example, and as much as I believe that sometimes fancy-looking things trick us thinking that they sound better, I just can’t help loving how Serum looks. Sure it ain’t wrong? To me, an inspiring look and a clear and fast-to-use layout are, more often than not, definitely a factor contributing to how I feel about a product when it comes to looking at it for several hours, and that’s where Xfer hits the spot. I’m definitely not as geeky with synths as I am with samplers, so these things do matter – and inspire (or not).

All in all, Serum’s definitely become a tool in my arsenal I’ve been enjoying a lot and will be using a lot in the future. I’ve been able to come up with some really useful sounds really quickly, which in my book is a massive plus (look out for some Serum palette on Fanu album in 2016…see the eerie string in the tune Polar Chord in the mix for DNBA for example).
Oh, yeah, one last thing: it sounds clean. Impressively clean. It’s not like I’m always paying attention whether something sounds crystal-clear and I do have the habit of almost liking polishing things (hey, I do mastering after all), and as I said, I love that dirt, but Serum’s cleanness really did strike me, and nothing’s as amazing as creating a lush pad sound that’s pure clean audio sexx for your aural receptacles. Or that bass sound whose sub is such pure brown note bliss that there’s no way you’re not going to have to change your pants after rocking it.

Serum is great – get it, and you won’t regret it.