So here it is. The fifth / sixth album by yours truly, depending on how you count it.
Daylightless, Homefree, Serendipity, Departure, and Lodge, if you want to count that one in. And now, Strange Lights.

What to say to kick this off with? Actually it seems I have a shitload to say, so let’s do this. Get some coffee or a beer or something to make it thru the whole damn thing.
But if you ain’t into reading, it’s fine, here’s all relevant links so you can grab the music:
Bandcamp page (lets you download it)
Soundcloud player
Youtube playlist
direct mp3 download
direct wav download

[btw, that dope-as-heck artwork was done by Lonekink so hit him up!]

• • • GOING BY THE GUT • • •
As I’ve got older (funnily enough, it’s my 35th birthday today), I’ve learned that in life, whenever you go by your gut feeling, most often you’ll act right. You know, those things that you do just because they feel right without you having to over-analyze it to death usually are pretty good choices that you don’t end up regretting much. Intuition is a great guide.
The best things in life always happen very naturally when it all just feels right…they “just happen”. If there’s ever a cloud of “Mmmm, I’m a bit unsure about this” above your head, it often ends up a bit shittily or at least not-so-well. I mean, things that take a lot of forcing, trouble, pestering, hassle etc. usually don’t result in anything highly pleasant, long-lasting or anything really good. That goes for all sorts of projects, collaborating, human relationships and all walks of life, pretty much; I can see it now.

Giving this album out without asking anyone to pay a penny for it was one of those things. As I realized the album was done and I was thinking about its release, it simply hit me: give it out for free, even though I am privileged to be working with a major distributor in my field and could get it up on all shops, Spotify, Beatport, Amazon, everywhere.
Pretty crazy, right?

• • • SO, WHY GIVE IT AWAY? • • •
I’ll be honest with my motive for the giveaway. Lemme be frank.
This giveaway relates to something I get asked quite often today:

What’s said there is true, sad, a fact, not sad at all, funny, and anything in between – depending on the mood I am in when I am to reply to such question (I get those via DMs, email – and people ask me that on gigs especially, and usually I just get some more beer and say, “Shit, dude, I dunno!”).

You know, when you work on something for “somewhat long” (I started making music around 1992, started releasing around 2003), you’d like to get “somewhat far”, and honestly, I can agree with the above sentiment. I’m not ashamed to admit it. And that relates to me giving this album away, because I’d love for you to spread it as much as you can – if you like it, that is.

See: today’s music world is saturated. Over-satured as fuck, to be precise. Many music consumers are a bit “lost”, or at least in drowning in music as digital truckloads and heaps of music comes their way every day. What doesn’t make it easier is that everybody’s a DJ, everybody’s an artist – because it’s so damn easy. It only takes downloading some music and a piece of software (you don’t even have to pay for that anymore), setting up a page, buying some likes (tsk, tsk…) and there you are. And if you want to go a step further, you can pay for a person that spreads that music in the inboxes of people. So there you are, an artist, just as everybody else.

What separates the wheat from the chaff today, then? Who puts artists in a position where they are “big”, where they appear hot shit and promoters think they wanna book that guy, and where they are respected so much that people start checking their music out amidst all the noise out there and all the other artists and “artists” trying to scream the loudest?
Basically there’s two things helping artists climb up to those “higher echelons” if you will:
(1) respected music media, and that’s what I can’t seem to get my foot in the door with. I’ve tried. I shit you not, I’ve tried. Go figure. Ain’t analysing it. Same goes for influential figures publicly supporting artists’ music.
Getting support from those can help you immensely, and it seems they have more power than ever before to tell people whose music is great and who has the golden balls of steel of the month, but somehow I’m at a different wavelength with them. Haven’t tried kissing ass, though, and I won’t. But hey, no long faces here, since we have
(2) friends’ and other music lovers’ recommendations. And here’s where you come in!

If you like this album….SHARE IT. It does do a lot. What all artists want the most at the end of the day is to have their music spread. Because that leads in that getting booked kinda thing, virgins coming down from heavens to pour sake in your mouth…all that good stuff.
So: spam it around, ask your dog to bark about it, tell your mom to play that shit so loud at her workplace that people pass out and vomit. Ask your dad to blast that shit in his car so loud he gets arrested and makes the news, and then, when he gets asked what that awfully shitty “EDM” noise was, he’s gonna say it was me. Or something. You probably get the idea by now. You figure out the rest.
I’d love to see the full might of today’s social media with this one. I’m counting on you, hey!

Honestly, I’m not asking you to pay a penny for it if you don’t feel like it. To be super honest, if you share the album and tell people that you like it, that IS extremely helpful – because, after all, that’s what the music media and influential music-supporting figures do. So yeah – share the Soundcloud player, the Bandcamp page of the album, the direct download links, this post…or whatever you find suitable.
And only do it you like it (d’uh!); I ain’t into that “unlock and get a download with a Tweet” shit. For how can you know if you even want to tell people about it at that stage?

Also, as corny as it may sound, I love this music and want it to spread as much as I can, and that’s another reason to try and have it go as far and wide as possible.

As we were discussing the release of this album (and some other giveaways earlier), several people were suggesting a Paypal donation button for those who want to do a direct donation without letting Bandcamp etc. have their cut. I’ve always disliked how those stupid little buttons look, and now I have one of them here, too, so yeah, here it is.
[And if for some reason that button ain’t working, my Paypal addy is fanusamurai@gmail.com]
(oh and I’ll be frank: that money will probably be spent on bacon, beer, whiskey, coffee, and tackling occasional rent worries, all of which, though, inspire me to make more music)

• • • SO WHAT’S THIS ALBUM ABOUT THEN?  • • •
Oh yeah, shit. We had some music here, too – not just my worthless wording.
It’s definitely a new step for me. It’s way more modern and hopefully more “futuristic” than most of what I’ve done so far. I feel really good about it.
And there’s way more in the works…single works, collabo stuff etc. I’m more interested in bass music and where it is than in years, TBH.
Is this drum and bass? I dunno, I don’t really care. I suppose it’s “bass music” in lack of a better term. But the tempo is 80/85/160/170 BPM so you can mix it with your favorite D&B stuff.
So yeah, shit! That’s all. Thank god. If you made it that far, it’s almost like I owe you a beer for reading thru all that crap. Speaking of beer, I think I’ll get busy with some birthday brews.

I think that’s all. Oh, this is my grateful face. 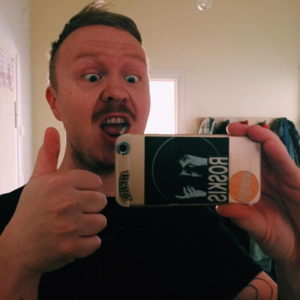 Unlike many other bass music heads, I did not hire a professional photographer to take important-looking photos of me. They would’ve at least told me to take that gum out of my mouth.