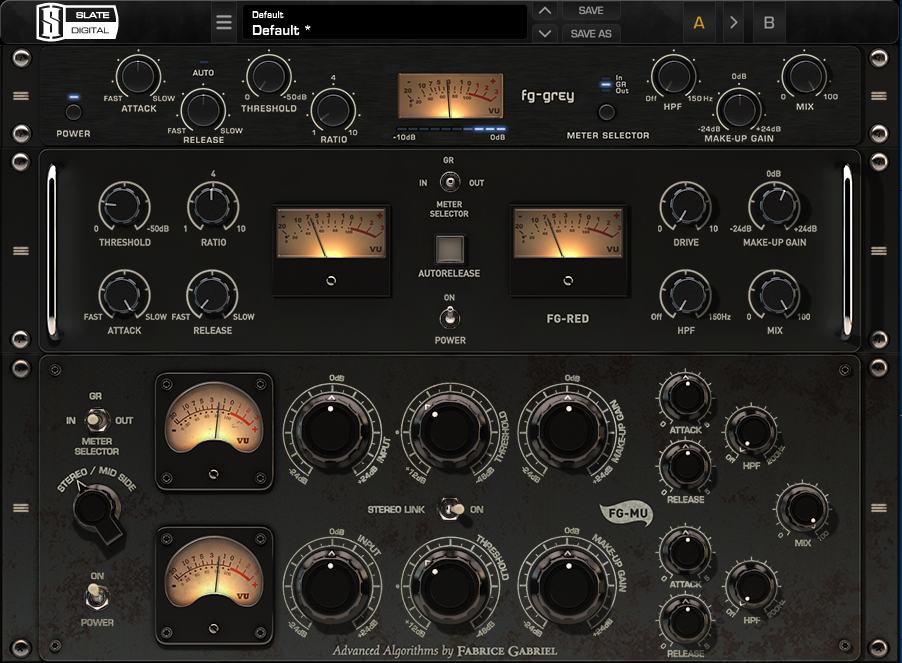 This article is about compressing a song – I won’t go into compression in general or compressing individual tracks/elements of a song to keep this post on point and brief enough.
(The settings seen in the compressors above are made up – I just wanted to use a pic of Slate VBC because I like it a lot)

The reason I wanted to write about using a compressor to compress a song is that I see that there’s a lot of misinformation being thrown around on music forums (because so many people are doing it these days). Compression and mastering especially are hot topics while many music-techers are trying to learn and understand them as the tools are available to everyone – but there’s also a lot of false info out there, and as I lurk on music production forums, I see people ask for help on mastering because they want their song loud, and it’s very common to see someone say “Just compress the song a lot” or “Push it into a multi-band compressor and then maximizer” without anyone explaining why.
Well, someone not super familiar with the process does what he’s told (in hopes of getting his song loud and punchy) and often probably ends up squashing the dynamics of his song – because no-one told him why/when/how he should do it. Saying “You must compress” is a bit like a barber who says “I’ll be chopping off 5 centimeters of your hair regardless” when you ask him to trim it very slightly.

I briefly want to touch two topics: compressing a song using a “simple” compressor (often also called “a bus compressor”) as well as a multi-band one. These are from my own perspective – i.e., a mastering engineer’s perspective (mastering meaning the song is made as balanced as possible, which is a major part in mastering. If you’re interested, I wrote a post about my mastering process earlier).
I’ll leave all sorts of über-geekery out and won’t go into talking about stuff like how crossover smearing happens in the inter-aural particles of semi-transparent mastering haze…yeah, that.

1) USING A SIMPLE COMPRESSOR
What do I mean by simple? You run the whole song thru it as one signal without touching different frequency ranges or splitting it into parts in any way (see the next point, multiband, for that) [however, you may use an in-built high-pass filter, like in Slate’s VBC for example, to filter out of the signal to be compressed the low end containing a whole lot of energy so that won’t trigger the compression – we want to aim higher than that but that’s all).
So why do we use a compressor? For leveling – to make the sound balanced, more coherent, to add some “glue” (as is often said when talking about a mix where things are nicely in balance). I bet you can name a good mix where nothing sticks out and everything seems to be in perfect balance. A compressor can help you in that respect.
A compressor is best used in moderation. You don’t absolutely ram your song into it. Or, well, you can, but it’ll sound crap. I get sent songs for mastering on the regular these days, and every now and then I must ask the client to turn the master compressor off and re-send the song because it’s often been misused, and the song may sound squashed, pumping, and lifeless. Personally, I never compress by default. The compressor I use in mastering (most often Slate Digital VBC Grey) is always off, and I only turn it on if I hear it’s needed.
In mastering, by far the most common use of a compressor is to level things – it doesn’t relate to making the song loud as much as many producers seem to think in their quest for maximum loudness.
So how does it happen? What a compressor does is it reacts when the signal exceeds a set threshold, and presses the exceeding signal down, in a nutshell.
When? I use a compressor if I think the beats are too loud. The most common scenario I see is snare being too loud, and the other sounds appear too quiet compared to it – that’s not the sound of a professional song; you want a nicely “full” mix where the dynamic range isn’t too big. I’ll usually go for fast attack, fast release, play with the ratio, and set the threshold so that I get roughly 1–3 dB of gain reduction – but I HAVE to emphasize that there are no rules…you HAVE to listen. There are simply no rules in terms of all that fast/slow/numbers craze, and you could pretty much set the compressor your eyes closed as long as it sounds right.
Even Dave Pensado said something like “I don’t carve sounds – I just mess with it until it sounds right”. So you know that the “rule” that says “If it sounds right, it is right” is extra legit.
Listening is by far the most important aspect here, not seeing what happens. I listen and do whole a lot of on/off, letting my ears rest a little (especially when dealing with compression), and make sure it’s doing exactly what’s needed. It’s easy to overdo this part and ruin the song.

2) USING A MULTIBAND COMPRESSOR
A multiband compressor does the same thing as the compressor described above, but it splits the signal into several frequency bands and treats them individually. For this, I use Izotope Ozone 6.
When I started looking into mastering some years ago, I, too, was told by many guys who (I thought) knew mastering to “Run your song into a multiband compressor and push all the bands into it”. No, no, no. Why? Why by default? This is where a lot of people go wrong, and that’s how you can ruin a perfectly fine mix. You don’t necessarily need a compressor.
How I use a multiband compressor is I pretty much make sure there’s nothing happening by default, but if I hear there are sounds/frequencies that are jumping out of the mix (most often this is sub), I bring the threshold of that frequency band down in the compressor so that something starts happening: all of a sudden that frequency area isn’t as strong/offensive as it was. Maybe there’s a white noise riser sweep in the upper mids that gets too loud, or maybe the singer has been left a little too loud here and there – I first bring the threshold to the general level of the song in parts where there’s no problems so that there’s barely anything happening with gain reduction, but as the sweep (or the singing) starts to get too loud, it gets pressed down.
So, once again, we’re doing leveling here – i.e., controlling frequencies so that they don’t leap out of the mix and hit the limiter (which is the very last thing in my chain) too hard. A  sound that jumps up all of a sudden may hit the limiter too hard, causing distortion. A multiband is one of the tools I use to make sure that the overall sound is balanced – I don’t use it to make the song loud per se (although it relates to that because you will need a balanced mix if you want to get a loud master, because if you have those crazy frequencies popping up and you don’t tame them, that’ll mean a loud master can be hard to achieve).

TL;DR
I don’t do a whole lot of compression. And when I do, I level things and keep them at bay. Gain reduction of 1–3 dB can be plenty, and more than that can often be heard (we want to be transparent / non-audible with compressing things).
You probably shouldn’t do a whole lot of it either unless you know what it does, and when you do, use it in moderation.
Approx. 70–80 % of the masters I do probably don’t see any compression at all, and I’ve heard “The master I got from you sounds so loud and balanced, and you have kept the dynamics, too” often, and it is my goal. I can admit I have also heard a bit of “The master I did / got from another mastering guy sounded way more squashed and my transients appeared lifeless”. I suppose “my sound” in music production and mastering has always been not-so-compressed.
In production, I’ve always loved saturation and running things red (in analog) to kill peaks instead of compression. Compression isn’t a major tool in getting things loud as much as many people seem to think.

PS:
You can get a similar “targeted” compression type of effect with a dynamic EQ, too, which can be more precise in some ways as it targets the set frequency range extremely accurately – being a bit like a multi-band compressor. For that, I’d recommend MAutodynamicEQ by Melda.