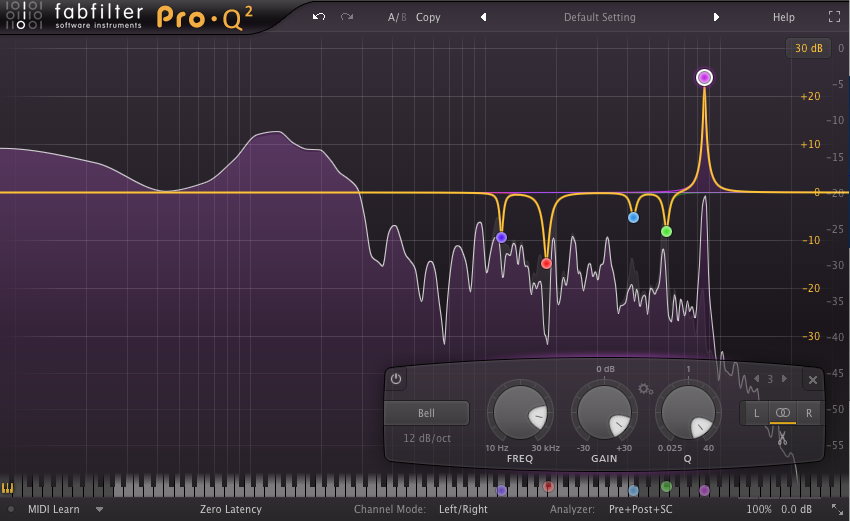 It often happens that the sounds we use in music contain a bit of useless noise that only fills up the bandwidth. Our ears get so used to hearing our songs, we may not hear these things while we’re mixing, so this is a good way of removing what’s unnecessary. We end up getting all kinds of small things with funny resonance in our mix, and in the end they often accumulate, so it’s good practice to get rid of ’em.It’s easy to find it and carve it out to make your mix more spacious. This can be done with any EQ out there, but it’s preferable that the number of bands can be pretty high.

Use EQ bands with narrow Q setting and high boost (see the rightmost band in the pic), around 15+ dB, to find “annoying”, unmusical frequencies in your mix. As you’ve set the band to narrow Q and high boost, “scan” thru the frequency range slowly back and forth, and you’ll hear it when something starts to really stick out of the mix. Then, once you’ve found that, simply do a cut on that band, cutting as much as feels good; it’s usually safe to cut, say, -3 dB, or more but I rarely carve out more than -7 dB or so, but it’s always case-specific.
Keep the band narrow to not cut too much out of your mix: we only want to find the annoying stuff, and those badboys don’t usually take a very broad space frequency-wise (if you find that’s the case, though, you should go back to your mix). Do this with several bands (as seen in the picture) until you’ve carved out all the unnecessary clutter out of your mix. As you’ve found everything, try flicking your EQ on/off to hear the total result, and you may be amazed how much clearer your mix sounds. Also make sure you’re not carving out too much; the sound may get hollow and unnatural if you do.

For me, this is a part of mixing as well as mastering process. I do it to instruments / tracks, but nothing says you couldn’t have a master EQ doing this while you work on your song; just make sure to do this at a later stage when you probably have all the elements in your song you’re going to use. Loop a busy part of your song for this process. I do a bit of both.

Resonant stuff or “ringing” is common with old recordings as well as those made with cheap recording devices, and rooms tend to create their problems in recordings, too. I tend to use lots of old funk breaks, for example, and some of them can sound a bit funny, and a lot of unwanted stuff can be there you may want to notch out. However, it’s good to realize that some of that can give it its character, and you may not want to get too “perfect” with it in order to retain its vibe.

As for plugins: Fabfilter’s ProQ2 as well as any sonogram (such as that of Melda Productions’ MDynamic EQ) can be great for actually showing all that resonant stuff for you.