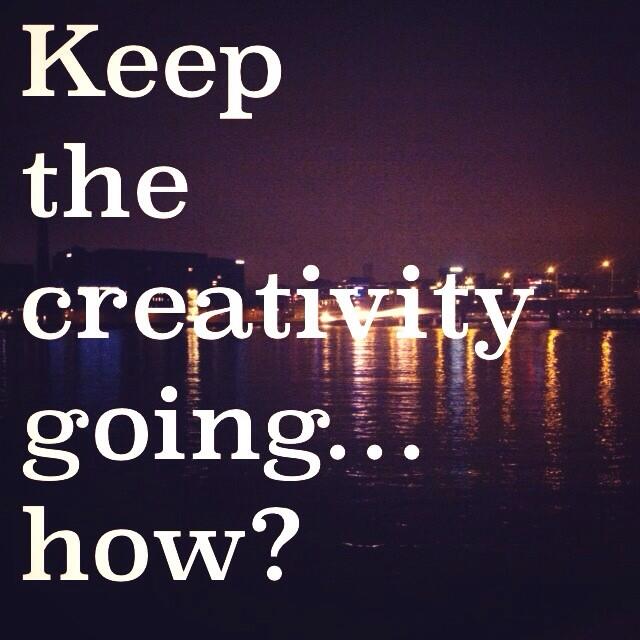 Concentrating on your work – especially creative work that needs a bit of inspiration – seems to be the hot topic these days, but it’s that for a reason.
The modern man with all his contemporary digital distractions, let alone non-digital ones brought on by life, can get in the way of one’s creative process and gnaw on one’s inspiration.
This can stop the juices from flowing, and certain principles can be of help.

Here’s a few ideas on how I keep the production going. These are about making music but I can’t see why this couldn’t be applied to any creative work.

I dabble with music almost every day in some way. I often have some small initial idea that I want to start with. It’s finding that decent idea that’s the key for me. It can be a sound, a beat, or even a speech sample that creates a certain vibe inside of me, around which I know I will want to build something. I keep notes of ideas; if I happen to come across a good sample (I have gazillions of samples and I sample everything all the time) or an idea that strikes me, I write a note about it on a dedicated notepad for ideas. That way, I don’t have to remember it – and in all honesty, with all the ideas popping up ever so often, I couldn’t. A notepad with worthwhile ideas is your friend, trust me! I don’t want to waste the good ideas; I don’t want to work on 10 songs at the same time but I do want to remember all the good ideas, and that’s what a notepad is good for.
I also keep a notepad of all the songs that are being worked on as well as finished and not released (this helps me to plan releases a bit). I try to have less than five songs in the works at the same time.

As I have all those ideas waiting to be worked, I simply wait for the right moment to work on it. I know that in reality, we can’t always wait for optimal moments for everything, but if/when I have some time and energy, it’s quite easy to work a decent idea/sample/loop into a song. However, it’s happened to me numerous times that I’ve kind of “wasted” the opportunity: I’ve tried to “force” working on something I’ve liked in the middle of numerous things going on or which I’ve had to take care of (work, obligations, stress), and soon the idea/loop that sounded cool gets kind of old and I lose interest. This is because I’ve failed to have decent sessions where I can simply concentrate on my work without something annoying or stressful rubbing the back of my mind.

So, focused sessions are important. It may work for someone to work on music when they’re super stressed and busy with many things, but I’ve found it doesn’t work for me as I need a certain amount of mental space. So, I don’t even try to write music when the timing isn’t somewhat right. I’m saving up energy for those moments when I can really immerse myself in music – and I’ve found that to be very important. And those moments don’t even have to be long! The amount of work you can do in even two hours when you’re charged and fully focused can be A LOT in terms of writing a song, for example. Most of my songs are written in a few somewhat brief sessions today – but those sessions are full of energy and focus. Forcing marathon sessions is only counter-productive, in my opinion (which doesn’t mean it could work for someone else).

This kind of relates to the previous point, but don’t burn yourself out with any negative feelings you might get when you really want to work on music but don’t have the time and bring those feelings into your creative session. This has happened to me many times; a musical idea I’ve loved has been spoiled with sessions where I’ve been tired, stressed out, and forcing it. Cherish the positive vibes you get out of the fact that you’re able to create something that impresses you. To the best of us, no matter how much we love what we do, there may be times when we simply need a break and trying to work on an idea isn’t the perfect thing to do right now. Give it some time, wait for the moment – it’ll come.

Again, this kind of relates to what I said in the previous point: I don’t start a music-making or a song-writing session until there’s some solid idea that can grow into something. I want to avoid the “Ahhh shit, this ain’t f*cking going anywhere” feeling where I just want to throw the whole thing out of the window. I used to get that a lot when I went for the “OK, let’s make some music but I don’t know where to start” thing. I have learned that I can’t always make a song just like that; art can’t be forced, and frustration that comes from trying to force it can be your worst enemy and make it all feel like something you may even start to avoid.
Know when to engage in a bigger session and when not; it’s necessary to know when to go thru smaller, initial ideas without engaging in anything “bigger”. I’m always going thru sounds etc on my laptop and feeling it out, and if I find something that strikes me, it’s then that I put everything else aside and start working. You can’t be writing songs all the time, but you can be looking for ideas most of the time.

I hope I don’t sound very contradictory, having said what I just said, but sometimes, starting a job properly and taking the first step is all it takes to get it done. The laziness demon is often there and you just gotta beat it; you know you’d wrap up that one song if you only started – and that’s all it takes sometimes. With this I mean a situation where I know it takes one session for me to get a song finished and deep inside myself I know it’s not a lot and on the other hand I also crave for the moment I can start playing around with new ideas…but I can’t take the first step. I kind of avoid it. Read forums, peep the Twitter timeline, try to think of something, anything, but not the song/project I know I can finish with one decent session – if I just start it.

What might help here? Well, sometimes I kind of trick myself into working. What I do in a situation like that is that I allow myself to start a session and I give myself the permission to stop it immediately if I start feeling bored or forced – and 80 % of the time I find myself working on the song and spending 1–3 hours with it. And it’ll be a wrap or at least I make good progress, and I’m glad I started.

Writing music is similar with physical exercise in the sense that the more regular you make it, the more you will get out of it and the easier it is to keep it regular. I do my best to run or go for a good, long, hearty walk 3–4 times a week. I find it almost necessary to “keep it up to keep it up”. Keeping it regular helps with momentum: it becames part of your routine and you don’t want to skip it. But if you skip it a few times, the laziness demon is there – isn’t it! You skipped it yesterday, let’s skip it today, and it definitely won’t be hard to skip it tomorrow…all this while you actually know you want to do it. We’re funny like that.

Having said everything I said above, I must also admit that even though it does help to wait for the “right moment” and the “perfect” state of mind, it must be admitted that what “creativity” and “inspiration” also have in common with exercising is that “creativity” and “inspiration” are work – and you need to put the work in. Period. They are often represented in a very romanticized light. For those who produce material on the regular, it isn’t always easy or a sweet, beautiful incident; you won’t find those things at the end of a rainbow. The virgins ain’t gonna fall down from the heavens and pour Creativity Cocktails in your cup. No. Sometimes you just need to make it happen. Let me finish this by a great quote from Resound’s Facebook page:
Let go of waiting for inspiration to strike: Inspiration is for amateurs. I wake up every morning, rain or shine, feeling great or sore, and I get to work. Not because I’m a machine, or a better person than anyone, but because I have systems that I depend on — not willpower or inspiration.
Waiting for inspiration to strike is a quick way to randomly pursue something, then give up, only to yo-yo back a couple weeks later, eventually leading you to hate yourself. Trust me, I have enough hate for all of you. I really don’t need you to hate yourself.
-Ramit Sethi